I invite to watch first the following videos which present concrete proofs that WW3 has indeed started on April 22, 2020:

On April 22 2020, Trump has started WW3 by giving the order to his Navy to shot and destroy any Iranian boat which approaches them. 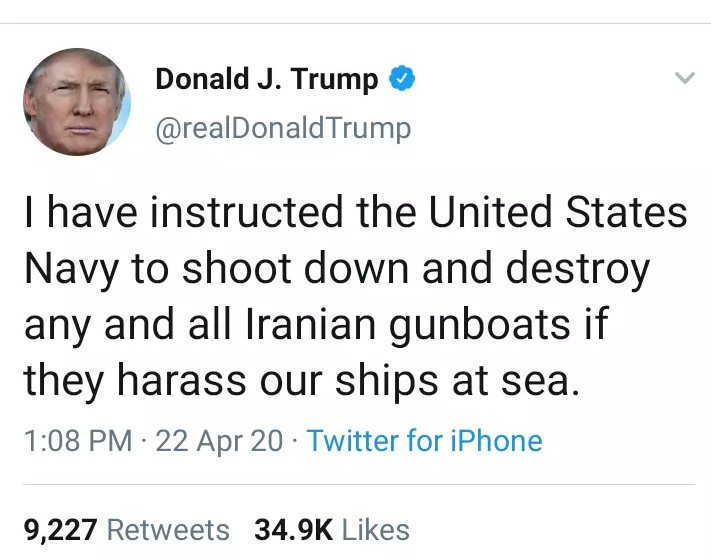 While the US fleets are now located very close to the Iranians waters, at any moment the first confrontation will take place and will launch the cycle which leads to World War 3. Iran has already reacted by commanding its army to destroy any US warships in the Persian Gulf.

Moreover, the confrontation with China in the Pacific lets no doubt that this conflict will degenerate, the fact that China has been blamed for the Coronavirus pandemic will be the ultimate prettext to attack them. Syria, Iran, and the Baltic states will serve as a pretext for Russia to enter the conflict, and add to this Venezuela and North Korea, and this conflict will quickly spread to all the nations of the world. As I’ve announced it to you in my Warning from God and in the following video, April 22, 2020 is indeed the beginning of WW3.

April 22 is the 113th day of the year, April stands for A, which correspond to the illuminati code A113. Moreover, 04.22.2020 equals 444. The triple numbers are communications from the spiritual world towards the physical world. Things are decided first in the spiritual world and then are fulfilled in the material world. 4 stands for death, so 444 means that God announces to us DEATH.

These are others videos which proove that WW3 has indeed started:

This war is the first round of God’s Retribution, the first of a long list of increasing cataclysms which will lead to the Hour, the end of this terrestrial world. God has always used the greatest criminals, the most powerful nations to punish through their hands the other criminals, and that’s what is going to happen now. The United States will win this war and will be God’s Hand to punish the criminals. Once war will have officially started, there will be no more opportunity to redeem yourselves, I’ve repeated this to you enough times. For those who still want to take advantage of these very last moments of peace in order to seize their chance to be saved by God, this is God’s message for you, through his messenger of the End Times, myself, YS. Everything I’ve announced to you since the beginning of my mission as the Messenger of God has been fulfilled or is about to be fulfilled, which is the ultimate proof of my authenticity, in addition to all my other proofs. If you are not convinced, I swear to God that you’ll believe me soon when you’ll face very very soon God’s Retribution, but it will be too late for you, and you would have fully deserved what is about to happen to you.